When the first cases of coronavirus appeared in Cameroon, 26-year old Christian Achaleke, who works in an organization for economic development, asked one of his colleagues in logistics to buy hand sanitizer. However, locally it was only to be found at twice the usual price and so his office could only afford to buy one bottle.

Christian then remembered seeing a news report about a doctor and his daughter who made homemade hand sanitizer using the World Health Organization’s (WHO) recipe. 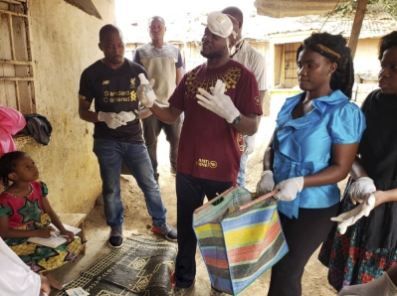 And this is when the idea came up: Christian and his colleagues bought the ingredients and, following the WHO recipe, created a mixture that worked perfectly. And so, they immediately decided to launch a campaign to offer hand sanitizer to people on the streets, whilst, at the same time, raising awareness of the risks surrounding the spread of the virus.

They decided to throw themselves headlong into the project to set its wheels in motion, deciding to cancel their planned annual retreat and using their own salaries. Their aim was to encourage young people to act responsibly, to spread correct information and to help people to follow the restrictions, which had become prohibitively expensive.

Christian contacted medical professionals throughout the country, asking them to help him to develop his idea. And this is how the “1 person, 1 hand sanitizer” campaign was born.

The project was transferred into a laboratory, where pharmacists, doctors, sanitation engineers and nurses worked together as a team. They immediately began to manufacture and distribute the sanitizer and their work is still in full swing (for updates, visit the Local Youth Corner Cameroon Facebook page).

And Christian also constantly works on ensuring that the labelling and distribution team raise awareness, in order to encourage people to follow WHO recommendations and to slow down the spread of the virus. He and his colleagues are helping people to keep their hands clean and stamp out misinformation that can cost lives.