Digital art increasingly blurs the fine line between artist and observer. Chromata, one of Michael Bromley’s interactive works, is an example.

"Hi, I'm a software developer with a focus on web applications, user experience and creative coding. I'm currently spending most of my time working on Vendure, an open-source e-commerce framework," is the friendly greeting that welcomes visitors to Michael Bromley’s website.

The first thing we notice is that he doesn’t use the word ‘artist’ to describe himself, although many invite him to take part in exhibitions as exactly that. This is the case with one of his best-known works: Chromata, currently installed at the Leonardo da Vinci National Museum of Science and Technology (MUST) in Milan, thanks to the support of the IBSA Foundation and a partnership with the Rocca Foundation. This is the same work with which Bromley was invited to take part Ars Electronica in Linz, the world’s most important electronic art biennial, also in partnership with the IBSA Foundation.

It’s well known that Milan's MUST museum is dedicated to Leonardo da Vinci, the genius who spent a large part of his life as an artist in the city, and most of his time there as a scientist. This is why the museum and the city seem the best place for installations by people like Bromley, who create works born from a crossover between art, science and technology - in this case digital technology.

Indeed, still on the subject of the digital world, if we Google “Leonardo da Vinci”, the first hit takes us to Wikipedia, which describes him as a scientist, even though his best-known works are paintings: works of art.

Defining art
So Michael Bromley helps us to reconnect the threads of the conversation on art that run through this article: the eternal question on art, its definition, and everything else. It is a debate that goes back to the dawn of time, as the Greeks defined art as τέχνη (technique). Of course, this has more to do with science, but also with the concept of beauty, not so much in terms of aesthetics, but in terms of ethics, as for the Greeks ‘beautiful’ also meant ‘good’, and therefore art is characterised by its moral usefulness.

It is therefore a shared form of art, and sharing, in the form of open, collective knowledge, is at the heart of Michael Bromley's work. Of course if we look at, or rather, if we interact with his works, we see that formally they have little to do with the art of Leonardo or the ancient Greeks. The shapes produced by the applications created or developed by Bromley use signs and forms that seem to be a replay of modern and contemporary art, from Impressionism to the present day.

It is no coincidence that in his presentation "The Artist and the Machine", on 30th May 2017 at the "WeAreDevelopers" conference, Bromley describes what art is, who makes it and how. He does this by showing examples in which he compares his work to that of British artist Desmond Paul who, in 1960, invented an analogue machine to create abstract/casual images that Bromley calls "one of the earliest examples of computer art". He also mentions the Spirograph, a toy invented in 1965 by Denys Fisher to create curvilinear patterns, and once again wonders who the real artist is: the inventor or the children who use it to create random mechanical drawings?

He also cites Max Ernst in his search for answers, showing how, in 1942, the Surrealist master created random drawings such as The Bewildered Planet, or Young Man Intrigued by the Flight of a Non- Euclidean Fly: drawings/paintings made by a machine invented by Ernst himself. The device had a plumb line with an instrument for drawing tied to its tip and oscillated over a sheet of paper laid horizontally on the ground. It didn’t matter whether it was a pen or a pencil, the important thing was that it randomly created an image that seems cosmic.

Bromley compares these images and art machines with the drawings generated by his creative-coding programs, showing us their elective affinities and more. This is what happens in his works in general, and especially in Chromata, software that processes source images provided by each of us that then come to life on a large screen as an example of generative art, bringing the public into the very heart of immersive aesthetic experiences.

Co-creation in Bromley's art
Bromley is a software developer specialising in web applications, user experience and creative coding, in JavaScript, TypeScript and Angular, which he uses to create open-source projects where code becomes a creative tool to bring sound or image-based aesthetic experiences to life. These include applications such as SKQW, a multi-platform audio-visual App created with Electron and Angular; or Heavenly Glory, built with getUserMedia API with WebRTC + Web Audio to capture a webcam stream and then use a motion detection algorithm to create kung fu movie sound effects that match your movements. There are others like CSS Space Shooter, an old-school arcade-style 3D ‘shoot-em-up’, rendered entirely with CSS and DOM that generates virtual environments and expanded spaces that recall the kinetic installations of the 1960s. Or Draw a Cat: a drawing app that eventually became a sort of crowdsourcing art experiment, in which everyone can draw their own cat.

In short, these are applications to create and/or co-create infinite works of art. A method whose work explores the area that combines programming and creativity in the analogue and, above all, digital world.

Here too the question, or questions, about what and who makes art and who the artist is, persist and keep Bromley’s research alive, because he never describes himself an artist, but a developer, trying to broaden the meaning, even if ironically. In fact, Bromley says: "Although I started in traditional art, it then developed into computer art, which I thought was way more amazing, because painting is great, but on a computer you can’t smell the stink and you can do it sitting down in comfort". 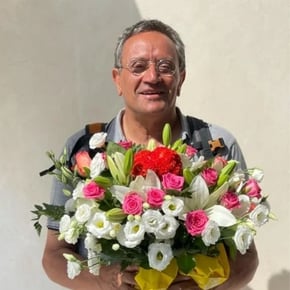 From pig to man, is xenotransplantation on the way?

In the coming months the US FDA will decide whether to allow the large-scale experimental transplantation of pig hearts that ...
Start Reading
Paolo Rossi Castelli 28 July 2022 19 min read

Carbon monoxide foam as a cure for the intestine

A new alternative therapy appears to treat the intestine. It is a drug based on molecular cuisine techniques that reduces ...
Start Reading
Paolo Rossi Castelli 21 July 2022 6 min read

Life on Mars: new studies on microorganisms in the Canadian Arctic

Identified life forms capable of surviving conditions probably similar to those of life on Mars. They breathe methane and feed ...
Start Reading