Is Art digital or not?

Digital art is a form of expression that has intrigued artists for several decades. So much so, that it has become a real tradition, with its own prizes, biennial festivals and museum exhibitions.

From the very beginning artists have traditionally been interested in using new materials, techniques and technology to give an expressive form to their artistic poetry, while assessing the aesthetic impact they have on society.

What is digital art?

Digital art is an artistic discipline that uses digital technologies. These are the result of an epoch-making revolution caused by the “dematerialisation of existence” and the emergence of a parallel life that finds an outlet through electronic devices like computers, iPads and smartphones.

These objects (and non-objects) are still made up of hardware, but their most important element is the software, which produces what we call virtual reality. However, its results are not that ‘virtual’, in that they affect our everyday, real life.

In her book “Media and Art”, published by Franco Angeli, artist Simonetta Fadda writes that we are experiencing a situation that is “more real than reality. The photogenic world answers our need to be at the centre of things, touched to the core by visions which, despite their technological nature, are not illusions but completely real to us.  They affect us physically, they get under our skin, they condition our gestures, and they take over our dreams… the media don’t reflect our world, they are our world.”

Scientists, philosophers and anthropologists have called it a real anthropological revolution of the third millennium, even comparing it to the discovery of agriculture, a crucial change that also fostered the birth of writing.

At the same time, the digital world is seen as the means to discovering a new world, in which data and flow charts expressed in alphanumerical data make up this new system. It is, in fact algorithms, a finite sequence of operations, an alignment of letters and numbers, that make this new reality possible.

So, mathematics, which most of us hated at school, gets its revenge by rendering this alternative world possible. So much so that author Italo Calvino claimed with foresight that “scientific and poetic approaches coincide both are attitudes, a combination of research and design, and of discovery and invention”.

The economy as a promoter of digital art: auction houses

However, it wasn’t aesthetic or the perception of aesthetics that brought widespread attention to digital art. Like many things in recent decades, it was the economy, as has been the case numerous times in art.

In the past few years auction houses have become interested in digital art. For example, that produced by the French group Obvious, a casual kind of 17th-century style painting, not created with oils and brushes, but using a Generative Adversarial Network (GAN), a tool often used to program video games.

Using this technology, the Obvious group created a painting by “blending and shaking” different portraits on the computer and adding an alphanumeric signature. When it was created, in 2018, this work, entitled "Edmond de Belamy, - La Famille de Belamy”, caused a real stir, not so much for its aesthetic qualities, but for the fact that it was the first digital artwork to be put on sale by the famous Christie’s auction house, fetching 432,000 dollars. This was nothing compared to what “Everydays” sold for, three years later in March 2021. "The first 5000 days”, a work by U.S. artist Beeple, fetched 70 million dollars (69,346,250 to be precise) at auction.  The work was a 21,069 x 21,609 pixel image, or rather collage of digital images produced every day by Beeple, from 2007 to 2021.

The interesting thing was not only the huge sum it sold for, which gave increased social exposure to a previously little-regarded artform, but also the way in which it was sold. Unlike the previous auction, this time Christie’s handled the sale not in the auction room, but entirely online, through digital platforms and systems.

The sale took place via an NFT (Non-Fungible Token) which defines and certifies ownership of the work – a file containing 5,000 images secured via blockchains.

It’s only natural that this has occupied the spotlight (and continues to do so). Not only in the art world but also in the world in general, both because the economy seems to be what interests people most today and because we live in a world dominated by the economy. But this is only the tip of the iceberg, and probably the least interesting element, of a phenomenon that has been unfolding for several years.

The digital as art: prejudice or normality?

The origins of digital art can be traced back to the 1950s, and to English mathematician, Alan Turing, inventor of electronic calculators and famous for having cracked the secret Nazi code used during the Second World War. He committed suicide in London in 1954 after being persecuted for his homosexuality.

However, as far as we are concerned, the digital as art is still struggling to find widespread acceptance. So, we are witnessing prejudice similar to that suffered by photography for many years, before it was considered an art form to all effects.  This happens because many people still think that art can’t be produced by a machine, although there is a long tradition of this in the art world too.

Now any kind of art is something that needs technical skill and techniques, just as a brush is a tool moved by a person. There are some forms of digital art in which there is no human intervention, but which are self-produced by intelligent electronic devices. We need to realise that this widens the scope of the discussion from art to the world.  In the words of Michel Foucault in his book “The Order of Things. An Archaeology of the Human Sciences”, “Man is only a recent invention … a new wrinkle in our knowledge … and (he) will disappear again as soon as that knowledge has found a new form.”

The debate is, above all, whether these latest forms of expression are art or not, and for which subject.

I believe that when we start a discussion that is so focused and all-encompassing about something that may be, the discussion itself transforms the object into art.

In fact, as Mario Klingemann says in “Art and Artificial Intelligence”, “Artificial intelligence and, in particular, GANs, is the sign that it leaves on a portrait like the grain on a photograph”. Or, I might add, the brush on a canvas. 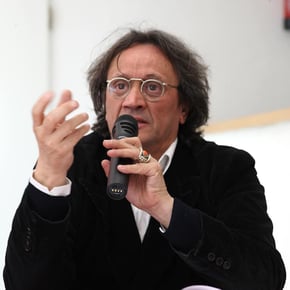 In the wake of COVID, a Hepatitis C vaccine is on the horizon

An American team has discovered how the hepatitis virus enters the liver: it resembles the approach used by COVID-19. Now a ...
Start Reading
Paolo Rossi Castelli 14 October 2021 5 min read

Reading: the road to a better quality of life

According to a Yale University study, people who read at least one chapter a day will live two years longer than those who do ...
Start Reading